National Instruments provides “LabVIEW For Lego Mindstorms,” an Add-On specifically designed for programming the Lego NXT brick. It works great if you are a LabVIEW user. But what if you want to integrate it with other applications, written in popular programming languages such as Java, C or C++? RTI DDS Toolkit for LabVIEW provides an additional set of blocks that you can use to easily share data between the NXT brick and applications written in other programming languages.

RTI DDS Toolkit for LabVIEW extends the benefits of RTI Connext DDS solutions to the LabVIEW platform. Connext DDS software offers a decentralized architecture for publishing and subscribing data. There are no brokers or servers: each application is either statically or dynamically linked with the RTI libraries. Data is exchanged peer-to-peer for extremely low latency and high scalability.

Let's illustrate this concept with a demo application. First, we assemble a Lego Mindstorm robot with 3 I/O devices: the ultrasonic distance sensor, the touch sensor and the motor.

Then, we build two applications:

Check out the demo in action!

To set up the demo, you'll need:

To compile and run the Java application in Eclipse:

In the Run Configurations for this demo, go to the Environment tab and add the path variable for your platform. To determine which variable to add, look at the RTI Connext Platform Notes. After installing RTI Connext DDS Professional, you can find the Platform Notes document in [NDDSHOME]/ndds.[version]/doc/pdf/RTI_DDS_PlatformNotes.pdf. The following example is from a Mac:

To run the demo:

Questions? Email labview@rti.com or chat with our experts in the RTI Community. 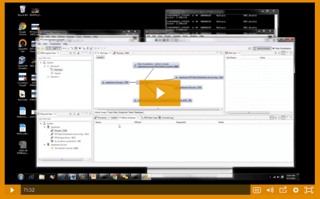 These Changing Times: Inside the RTI DDS Toolkit for NI LabVIEW