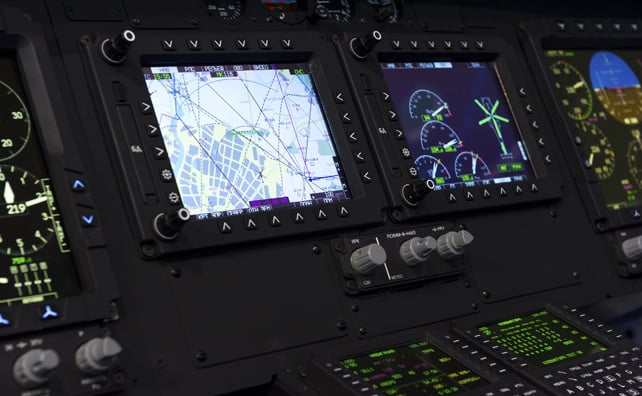 How do you demonstrate a distributed communications framework at a trade show?

In a busy show like I/ITSEC 2018 where you are surrounded by full-scale simulators and two-story booths with live interactive demonstrations, it is especially challenging. What Real-Time Innovations (RTI) offers is mostly under the hood – a secure, high-performance, scalable, distributed network environment that meets the evolving requirements of today’s military training systems. However, demonstrating the true power of DDS is difficult at a busy, chaotic trade show.

The new military training paradigm requires simulated environments that can be assembled and reconfigured in an agile, ad-hoc manner from ready-made, COTS components. Mixed reality systems need to blend synthetic computer-generated images and data with real data in real-time from distributed sources to provide Live, Virtual, and Constructive (LVC) training. And with new distributed training systems the need to secure that data across a cloud-based network is a core requirement. Add to this the increased pressure to meet demanding schedules for demonstration and deployment of these new capabilities, and the risk factor increases.

What is the greatest risk in any complex system development with multiple vendors, disparate systems and distributed networks? Integration.

So how do you reduce that risk? The proven way is to adopt the open-standards based, interoperability framework used in live, deployed military systems (TRL 9) for years: RTI Connext DDS. Based on the Object Management Group’s (OMG) open DDS standard, Connext DDS meets the necessary security and interoperability requirements for cross-vendor, cross-branch, and cross-ally simulation of the ever-evolving battlefield.

With its rich suite of tools, Connext DDS provides critical visibility into the communications network during development, integration and testing to dramatically shorten integration time. In addition, RTI Routing Service and Web Integration Service enable creation of gateways to legacy protocols, such as DIS and HLA.

How do You Demonstrate Interoperability?

The best way to demonstrate interoperability is to integrate disparate systems.

Our overarching goal was to create an integration of a High-Level Architecture (HLA) standard and/or Distributed Interactive Simulation (DIS) standard simulation platform and integrate that with a Future Airborne Capability Environment (FACE™) standard avionics platform using avionics hardware used in an HIL environment – VT MAK and the Harris FliteScene were chosen for this challenge. A sub-goal was to create something interactive, say a joystick and cockpit environment, for customers to enjoy when visiting the booth – Microsoft Flight Simulator was chosen for this platform. Additionally, we decided to use a proven data model for this demonstration, so the Harris FliteScene data model was determined to be the best cross-platform fit. (This was the same data model used in the Harris FACE conformance certification effort for FliteScene). A stretch goal was to integrate a proven gaming platform – we selected SimBlocks.io for this goal.

For the HLA/DIS environment we partnered with VT MAK and used their F-18 HLA simulation. We used VT MAK’s VR-Exchange broker for RTI Connext data model topics that represent DIS standard Protocol Data Unit (PDUs) that contain a specific block of information transferred over a network. The PDU of interest for this demo is the Entity State PDU which is represented as the SimpleBaseEntity topic, which has a position record (x, y, z Cartesian coordinates) and an orientation record in Euler angles. When transforming between the data topics, the coordinates also must be converted. The team used the transformation service of Routing Service to make this an easy process.

The team then attacked the stretch goal of integrating the SimBlocks.io gaming platform. We used the SimBlocks.io One World SDK with the Unity Game Engine and integrated its output with the Common Image Generator Interface (CIGI) standard, an on-the-wire data protocol that enables communication between a simulation host and an Image Generator (IG). The CIGI host subscribed to the DDS FliteScene data model topic and converted this element to a CIGI entity control message. Since there is not an existing data model for the CIGI host, we implemented a subscriber to UPDATEOWNSHIPLOCATION in the CIGI host.

For the Microsoft Flight Simulator X (FSX) platform the team created a bridge which maps data from Microsoft Flight Simulator to RTI Connext DDS. This bridge was based on the Microsoft Library example https://msdn.microsoft.com/en-us/library/cc730340(v=msdn.10) using the Microsoft SimConnect SDK. The published data from this platform conforms to the FliteScene data model enabling a common data communications channel and the rapid integration of the Microsoft FSX system to the demonstration network. We designed the FSX Bridge to publish UPDATEOWNSHIPLOCATION so it can directly drive the CIGI host and the FliteScene map.

As mentioned previously the Harris FliteScene platform has a FACE conformant data model. The data of interest was the UPDATEOWNSHIPLOCATION which has the position (latitude/longitude in degrees and altitude in feet) and orientation (heading, pitch, and roll in degrees) for an aircraft, which in this case is a (VK MAK simulated) F-18 fighter jet.

Harris FliteScene has multiple input messages, like Zoom, Underlay and Overlay, to control the display layout. The FliteScene map is centered based on the current position of the aircraft which is provided through the position update message. There are multiple sources which can be used to provide locations. To easily control the map features, the integration team created a simple user interface (UI) using the National Instrument LabVIEW™ product with the RTI DDS Toolkit for LabVIEW. The LabVIEW VI publishes additional topics of the Harris FliteScene data model to control the behavior of the map. This toolkit is based on a common connectivity framework, RTI Connext DDS, which enables distributed network system communication.

The next step was to transform the data models. As mentioned above we have the FliteScene FACE conformant data model and the DIS PDU representation used by the VR-Exchange broker. The Microsoft Flight Simulator and the CIGI gateway were developed using the same data model. The VR Exchange RTI Connext DDS gateway maps data from the HLA side to DDS topics (data model elements). The topics were formatted into messages using the DIS PDU definitions.

To connect everything together, a transformation from the FACE data model to DIS PDU topics was required. We used Routing Service to bridge the simpleBaseEntity topic to the location topic used by FliteScene. Besides the different data types, the two sides also used different measurements. The data coming from the VT MAK F-18 simulation used the HLA standard. The HLA data was in Geocentric coordinates, whereas FliteScene expects the date to be in Latitude/Longitude coordinates. The team configured Routing Service to map the coordinates using a custom transformation library which performs the translation between the different coordinate measurements.

Integrating a FACE avionics stack with Harris FliteScene was one of the easiest tasks because FliteScene was already a FACE certified application which uses the FACE Transport Services Segment (TSS) APIs running on a COTS avionics hardware platform. The team simply linked the RTI FACE certified TSS product with the FliteScene libraries and the avionics platform integration was complete, proving the FACE approach works well. Note that the FACE avionics software stack is not a simulation – it is an actual avionics hardware platform that interacts with the rest of the simulation demonstration platform as a networked HIL component.

From project start to finish this multi-vendor integration consumed about 75 staff hours, proving that multi-supplier, multi-standard simulation scenarios can be rapidly integrated using RTI Connext DDS as a network foundation. This drives down program risk and cost.

The integration of the different simulation and HIL components is defined in the graphic below: 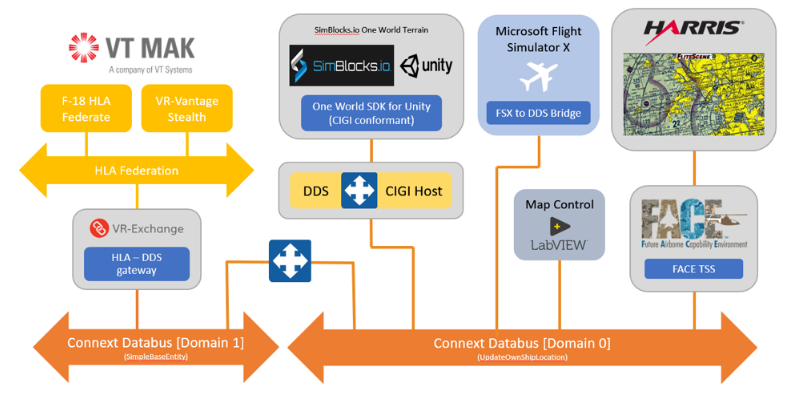 This demonstration integration proved the following:

Thanks to the entire RTI engineering team and our RTI simulation partners for helping make this challenging simulation integration a wonderful success story! 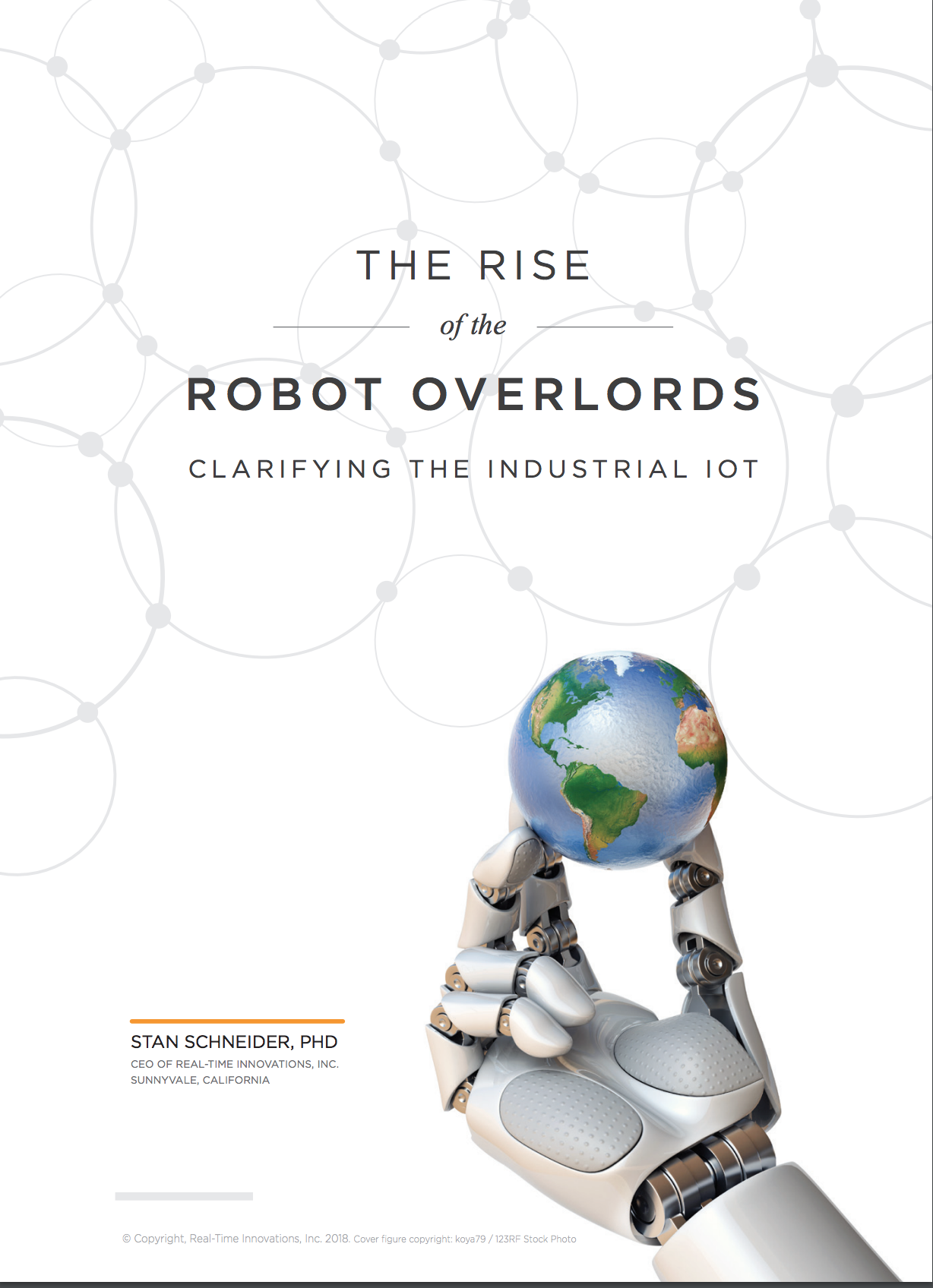 eBook: The Rise of the Robot Overlords: Clarifying the Industrial IoT