If enforcing system-wide security has turned into an elaborate puzzle, I’m pleased to share that we have the answer! RTI Connext DDS Secure 6.0 introduces a robust set of security capabilities to your system, including authentication, encryption, access control and logging. And thanks to its support of secure multicast, Connext DDS Secure 6.0 also enables efficient and scalable distribution of data to many subscribers. That’s data-centricity in action.

One of the advantages of Connext DDS Secure 6.0 over other non-data-centric solutions is that it provides fine-grained control over the level of security applied to each data flow. For an example of this approach, Figure 1 below illustrates what a data-centric autonomous car architecture would look like when based on Connext DDS Secure: 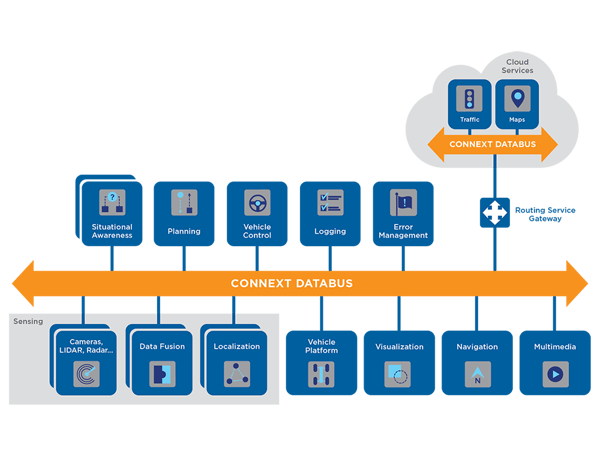 Thanks to Connext DDS Secure, we can now architecturally break down messages based on criticality for safety or need for data integrity. In our example architecture, it would make sense to authenticate the data that originated from the vision, radar and LIDAR modules, as we want to ensure that data has not been modified by an external attacker. But for sensors that do not generate sensitive information, we would not need to use encryption for that data. However, we would definitely encrypt all of the messages exchanged between the fusion and the control modules as in our example, because they use a proprietary protocol and need to be protected them from intellectual property theft. Finally, we may decide to not protect the multimedia contents at all, as they are not sensitive.

In this blog entry, I will walk you through the different levels of encryption Connext DDS 6 supports - these are levels that allow you to build systems like the one described above. For our purposes today, I’m assuming you are familiar with basic Data Distribution Service™ (DDS) concepts. If not, I recommend reading a high-level overview on the DDS standard.

A quick overview of the Real-Time Publish-Subscribe (RTPS) protocol

Connext DDS uses Real-Time Publish-Subscribe (RTPS) protocol to communicate over the wire, which ensure interoperability with other RTPS-compliant vendors. Some of the features of this protocol are:

Ok, that’s all you need to know about RTPS to understand the basics of how Connext DDS Secure protection works on the wire. So let’s go for it! 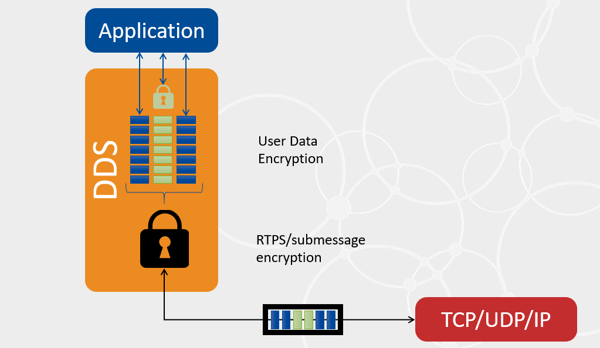 Figure 3. Location of the encryption

The authentication and encryption of the messages exchanged by Connext DDS Secure can happen at different levels:

One huge advantage of using Connext DDS Secure - instead of a transport-based solution like Datagram Transport Layer Security (DTLS) - is that it will save CPU in scenarios with multiple subscribers, as it eliminates the need for multiple re-encryptions. This is because RTPS encryption happens only once before delivering the same message with multiple destinations to the transport. Even better: if the network supports multicast, the savings in CPU and network bandwidth will make a big difference in system scalability, as messages will also only need to be protected and delivered to the network stack once as well. 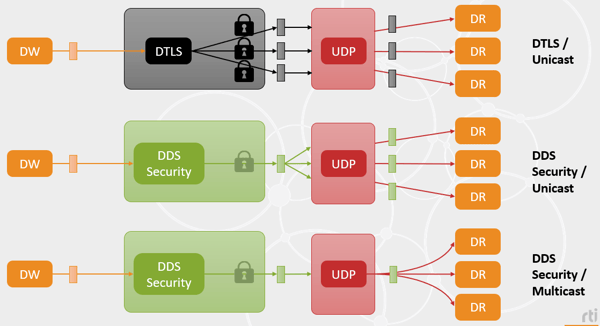 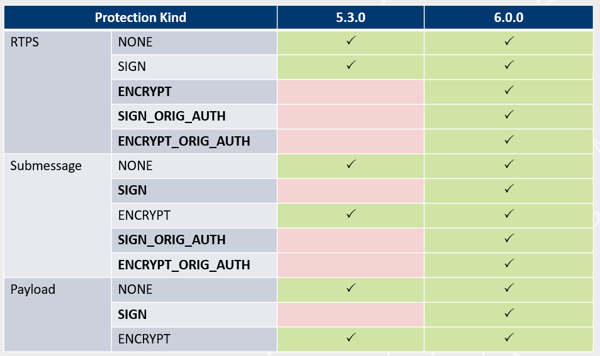 The WITH_ORIGIN_AUTHENTICATION protection kinds are as follows:

Using different protection levels (RTPS submessage, user-data) and protection kinds (encrypt, sign, origin-authentication) you are in full control to do fine-grained protection of your data. If you want more information about how these protections work, please refer to the OMG DDS Security 1.1. specification. Or even better, you can watch the replay of our December 3, 2019 On-Demand Tech Talk webinar. 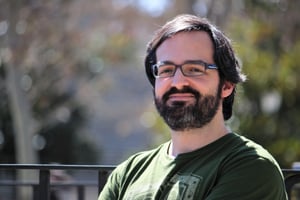 Jose Lopez-Vega is currently the lead for the RTI Connext DDS Secure product. He has been an active contributor of the latest OMG DDS Security 1.1 specification. His technical expertise spans large-scale real-time distributed systems, security, and network protocols.
He holds a PhD on Multimedia Systems, and masters in Multimedia Technologies, and in Telecommunications Engineering from the University of Granada.

ITTIA and RTI: Smarter DataOps at the Intelligent Edge