It all started a few years ago when the Future Airborne Capability Environment (FACE™) Integration Workshop Standing Committee released the Basic Avionics Lightweight Source Archetype (BALSA) example of a FACE Reference Implementation Architecture. BALSA is a software application containing Units of Conformance (UoCs) aligned to the FACE Technical Standard. Its purpose is to provide a working example to potential FACE Software Suppliers and FACE Software Integrators. It is also used as a teaching mechanism of how Units of Portability (UoPs), UoCs and FACE Application Programming Interfaces (APIs) can be realized on a potential system.

BALSA provided its own simple Transport Services Interface (TSS) implementation. The TSS implementation works well. However, one of the downsides is that there are no tools available that show insight into what is going on – which is critical when things don’t go as planned. We decided to see how easy it would be to replace the BALSA TSS with a Data Distribution Service (DDS)-based TSS, specifically RTI Connext DDS (https://www.rti.com/industries/face).

We were surprised at how easy it was to replace the TSS layer. It took us just a few hours to replace the BALSA TSS with the RTI TSS. This was also proof that portability, which is one of the FACE standard objectives, works well. With the updated TSS layers, we were able to use the DDS tools. In addition we also received access to connect to other DDS applications, making integration with other components easy. 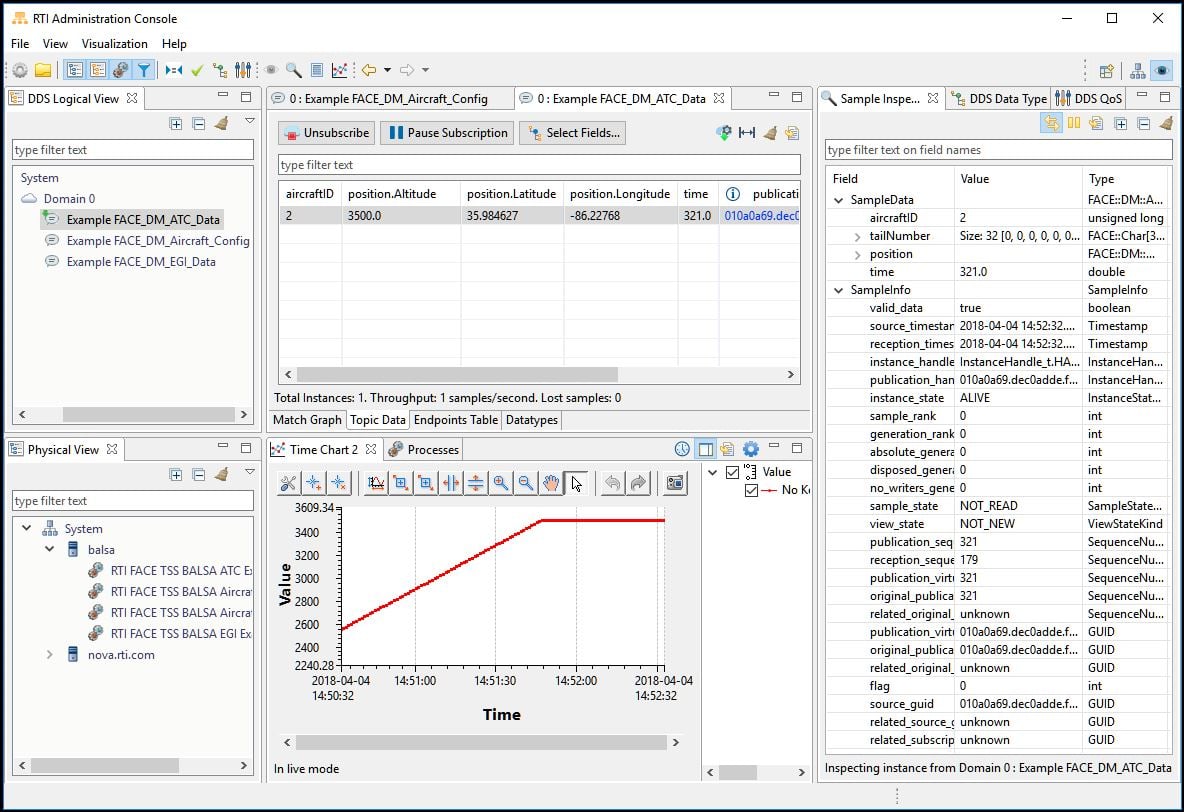 Another project was to use the RTI TSS with Harris FliteScene. The Harris FliteScene Digital Map is a high-performance, combat-proven, feature-rich digital moving map software product that provides advanced situational awareness for the most demanding conditions faced by both civilian and military flight crews. FliteScene supports advanced terrain awareness and obstacle avoidance features to help keep crews safe during missions, and FliteScene’s 3D synthetic vision modes help navigation through the worst conditions. FliteScene has been integrated with modern tactical networks, such as Link 16 and ANW2, providing a full real-time common operating picture.

This was also a good test to see how easy it is to port a FACE-conformant portable component to use the RTI TSS. From Harris we received the object files and data model. The steps to integrate with the TSS include:

It was surprisingly easy to integrate and in just a couple days we had a prototype running. FliteScene has multiple input messages, most of which are to control the layout (e.g., zoom, underlay, overlay). The map is centered based on the current position which is provided through the position update message. There are multiple sources which can be used to provide locations. To easily control the map features, we created a simple UI in LabView using the RTI DDS LabView Toolkit (https://www.rti.com/products/dds/labview). Since it is all based on a common connectivity framework, DDS, it all fits and works together like puzzle pieces. 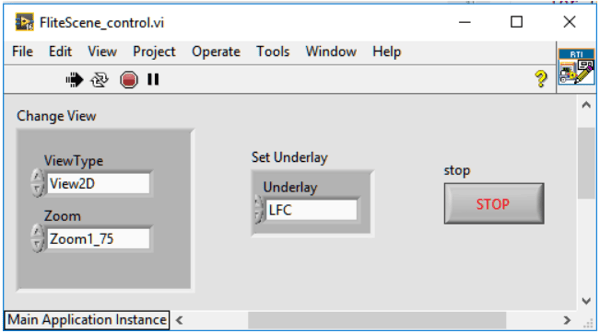 With FliteScene, we were looking at what we could use to provide input to the map. One of the ideas was to combine it with a simulation environment. VT MAK, a world leader in modeling and simulation, provides a product (VR-Exchange) which allows protocol transformation and bridging. VR-Exchange is a universal translator for distributed simulations and its open architecture means that you can develop custom brokers for other data standards like DDS.

Since both sides support DDS as a communications protocol, we decided to see how easy it would be to connect the two sides together. The plan was to connect an F18 HLA Federate to FliteScene, a FACE-conformant portable component. It turned out that it was pretty simple to get this working.

Using DDS as the TSS transport not only allows for portability between FACE conformant components it also enables connectivity to other applications using DDS. For Flitescene we used the RTI TSS based on RTI Connext (https://www.rti.com/industries/face). On the HLA side we used the VR_Exchange DDS broker which maps data from the HLA side to DDS topics. The FACE component does use a specific data model which is different from what is being used by the F18 Federate. The data needs to be mapped between the two data models. Two approaches are possible, including:

For our proof of concept, we used the latter approach. Routing Service needed to bridge the simpleBaseEntity topic to the location topic used by FliteScene. Besides the different data types, the two sides also used different formats. The data coming from HLA was in Geocentric coordinates whereas FliteScene expects it to be in Lat/Long. We configured routing services to map the coordinates using a custom transformation library which does the translation between the coordinates. We ended up with the following architecture: 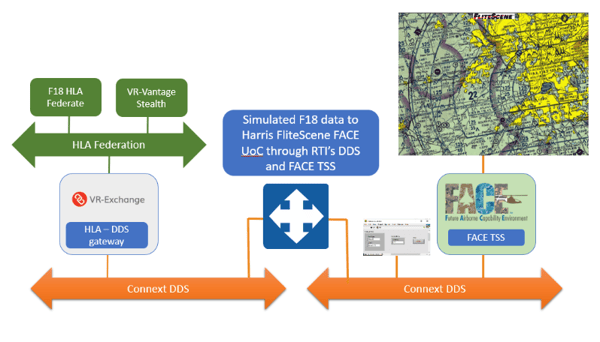 For more information on bridging HLA and DDS, RTI is partnering with the National Center for Simulation (NCS) to hold a seminar, “DDS for Simulation: How the Connectivity Framework is Meeting Interoperability Challenges” on April 10. For additional information including how to register for this complimentary event, please visit: https://www.simulationinformation.com/news/ncs-real-time-innovations-event-industry-10-apr-2018

From download to Hello World, we've got you covered.