This example uses and IDL file to define the types. The IDL file will be created and added once the project is created. The Android App built in this section can interoperate any other RTI Connext application using the same IDL file, same topic name, and compatible QoS settings. If a different IDL file is used, then note that the following steps will need to be altered slightly as the IDL file name, "HelloWorld" is used in completing fields and naming other files in this example. This example shows only the creation of the publisher application. These steps can be repeated to create a HelloWorldSubscriber application. If the subscriber and the publisher will be installed on the same device, make sure the subscriber's Application, Project, and Package names are different than the publisher's.

Select the form factors and click next. For this example we create an Application for a Nexus 7 tablet and selected an API level which makes it compatible with most of the Android devices. You can select different API levels based on your application preferences.

Choose Blank Activity since we are not creating any UI for this application. For your application you might want to use some of the other templates based on your target application. Click Next.

Last we select the name for the activity and some other elements. Edit the Activity Name as shown below. There is no need to edit any of the other fields since they are derived from the Activity Name. Click Finish.

After the project has been created, Android Studio will display the Project as shown below. At this point, HelloWorldPublisherActivity.java is the only source file in the project.

Edit the generated Java class (HelloWorldPublisherActivity) by adding the two lines shown below. This will create the simplest Android application with Connext. More sophisticated Android code can and probably would be used for a real application. Real Android applications should never call an endless loop from the main activity since this will stop the application from responding.

Create the HelloWorld.idl file in the project's java folder. Right click on the java folder and select New -> File.

Android Studio will open the newly created file for editing. Add the text as shown below and save the file.

Note that the -package argument is the same value as used when creating the project. If the rtiddsgen-generated java classes are in a different package to that of the project then "import" statements will need to be added to some java files. You can find the package name at the top of the HelloWorldPublisherActivity.java file.

If you run on Windows and do not have the Visual Studio compiler in your PATH environment variable add –ppDisable to the rtiddsgen command line to disable the preprocessor. Since the IDL file doesn't have any pre-processor statements running the pre-processor is not needed.

You will see the following un your command prompt window:

Done means that all the required type support files and an example files have been generated.

In Android Studio you should see all the additional classes which have been generated and the call to HelloWorldPublisher.main in HelloWorldPublisherActivity should now be shown as resolved. The USER_QOS_PROFILES.xml file, the HelloWorldSubsciber class, and the makefile is not used by this project. Those files can be deleted or kept for reference.

Resolve the Connext symbols in the generated java files by adding the Connext libraries to the project.

Copy nddsjava.jar from $NDDSHOME/class to the lib directory of your HelloWorldPublisher App. You should see the library being added as shown below.

The next step is to add the library to the build. Right click on it and select Add as library.

The library needs to be added to the application. Click OK.

If you open the build.gradle file you will see that the library has been added.

Connext is not pure Java, it also consists of some native libraries. When building the project, you will not see any complaints if these libraries are missing, but when you try to run the App, the LogCat panel will show errors such as:

Below is how I added the native libraries to the Android Studio project.

Add a lib directory to your project with a subdirectory which contains the native Connext DDS libraries (libnddsc.so, libnddscore.so, and libnddsjava.so). for this example named the sub-directory armeabi-v7. This will look as follow in your project.

Once you have your .so files in that directory configuration, create a .zip file from the lib directory. I named the file lib_rti.zip. The .zip file will have lib/armeabi-v7/*.so as the contents.

Rename the extension of the zip to .jar giving you a file names native-rti-libs.jar.

And then drag the .jar into your Android Studio project libs directory (same location as all your other jar libraries).

Finally, add this to your projects build.gradle:

Connext expects to use the Internet and Wi-Fi to access the Internet. It needs to be able to change some of the Wi-Fi settings. Connext also needs to access external storage if it is to read a USER_QOS_PROFILES.xml file (although the current example doesn't make use of that).

In the project Explorer, double-click the AndroidManifest.xml file to edit it. Add the following lines to the manifest file as sown below.

Before running the example make sure you have an Android device connected via USB or have a Virtual Android Device running.

Choose the device you want the application to run on. The example below shows a Nexus 7 connected through USB and a virtual device which emulates a Nexus 7.

Once it is running you will see the output being displayed in the logcat window.

If you have a machine connected to the same network which has RTI Connext installed you can start rtiddspsy and see the samples being published.

The sample code doesn't fill the samples with any actual values. You can add this to your code in the HelloWorldPublisher class. Look for the comment "Modify the instance to be written" 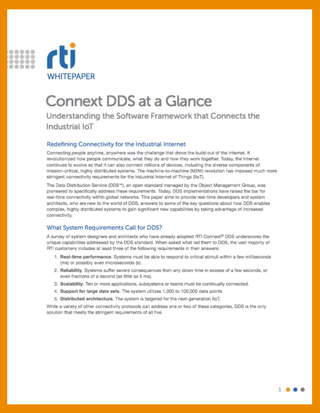 Understanding the Software Framework that Connects the Industrial IoT