Fog computing is getting more popular and is breaking ground as a concept for deploying the Industrial IoT. Fog computing is defined by the OpenFog Consortium as “a system-level horizontal architecture that distributes resources and services of computing, storage, control and networking anywhere along the continuum from Cloud to Things.” Looking further into the definition, the purpose is to provide low-latency, near-edge data management and compute resources to support autonomy and contextually-aware, intelligent systems.

In particular, fog computing facilitates an open, internet architecture for peer-to-peer, scalable compute systems that supports edge analytics, local monitoring and control systems. It’s this latter application to control that I think is particularly interesting.  Control systems have been in place for decades across multiple industries, and recently some of these industries have moved to create interoperable, open control architectures. In this blog, we’ll take a look at some existing open architecture frameworks that bear a resemblance to Fog and how Fog computing and these framework initiatives could benefit from cross-pollination.

Back in 2004, the Navy started developing its Navy Open Architecture. In an effort to reduce costs and increase speed and flexibility in system procurement, the DoD pushed industry to establish and use open architectures. The purpose was to make it simpler and cheaper to integrate systems by clearly defining the infrastructure software and electronics that “glue” the subsystems or systems together. The Navy selected DDS as their publish-subscribe standard for moving data in real time across their software backplane (Figure 1 below). 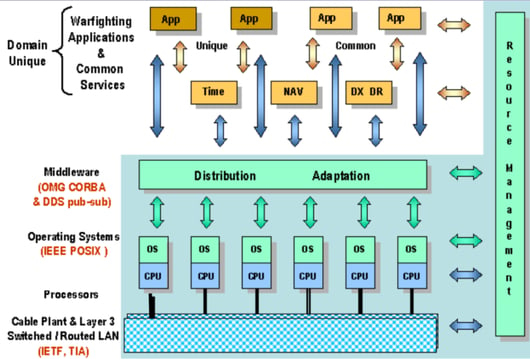 Figure 1. The Navy Open Architecture functional overview. Distribution and adaptation middleware, at the center, is for integrating distributed software applications.

Fast forward to now and we find the OpenFog Consortium’s reference architecture looks very much like a modern, IT-based version of what the Navy put together back in 2004 for open architecture control. Given that this Navy Open Architecture is deployed and running successfully across multiple ships, we can feel confident that fog computing as an architectural pattern makes sense for real-world systems. Also, we can likely benefit from looking at lessons learned in the development and deployment of the Navy’s architecture.

Instead of large, centralized power plants burning fossil fuels or using nuclear power to drive spinning turbines and generators, Distributed Energy Resources (DERs) have emerged as greener, local (at the edge of the power grid) alternatives that do not have to transmit electricity over long distances. DERs are typically clean energy solutions (solar, wind, hydro, geothermal) that provide for local generation, storage and consumption of electricity. But DERs are intermittent and need to be managed and controlled locally, as opposed to centrally, which is all that is available in the current power grid.

Distributed intelligence and edge control is the solution. The OpenFMB framework is being deployed and proven in smart grid testbeds and field systems. Looking at the OpenFMB architecture (Figure 2 below), you can see the concept of a software integration bus clearly illustrated.

Like the Navy Open Architecture, the OpenFMB distributed intelligence architecture looks very much like a fog computing environment. Since OpenFMB is still under development, I would bet that the OpenFog Consortium and OpenFMB project team would benefit by collaborating.

Patient monitoring, particularly in intensive care units and emergency rooms is a challenging process. There can be well over a dozen devices attached to a patient – and none of them interoperate. To integrate the data needed to make intelligent decisions about the welfare and safety of the patient, someone has to read the front-end of each device and do “sensor fusion” in their head or verbally with another person.

Again, the OpenICE architecture supports distributed, local monitoring, integration and control and looks very much like a fog architecture.

In this walled garden environment, integrating a latest and greatest subsystem, sensor or device is much more challenging. Integration costs are higher, device manufacturers have to support multiple protocols, and software application development has to be targeted at each ecosystem. The opportunity for the Open Process Automation Forum is to develop a single, IIoT based architecture that will foster innovation and streamline integration.

Looking at the Exxon-Mobil diagram below, we find, again, an architecture centered around an integration bus, which they call a real-time service bus. The purpose is to provide an open-architecture software application and device integration bus.

Again, we see a very similar architecture to what is being developed in the IIoT as fog computing.

In each case, a central element of the architecture is a software integration bus (in many cases a DDS databus) that acts as the software backplane facilitating distributed control, monitoring and analysis. Each group is also addressing (or needs to address) the other aspects of fog computing like end-to-end security, system management and & provisioning, distributed data management and other aspects of a functional fog computing architecture. They have the opportunity to take advantage of the other capabilities of Industrial IoT beyond control.

We have the opportunity to learn from each effort, cross-pollinate best practices and develop a common architecture that spans multiple industries and application domains. These architectures all seem to have very similar fog computing requirements to me.

RTI Named One of the Healthiest Employers of the Bay Area