Getting Started with Connext DDS, Part Four: From Installation to Hello World, These Videos Have You Covered 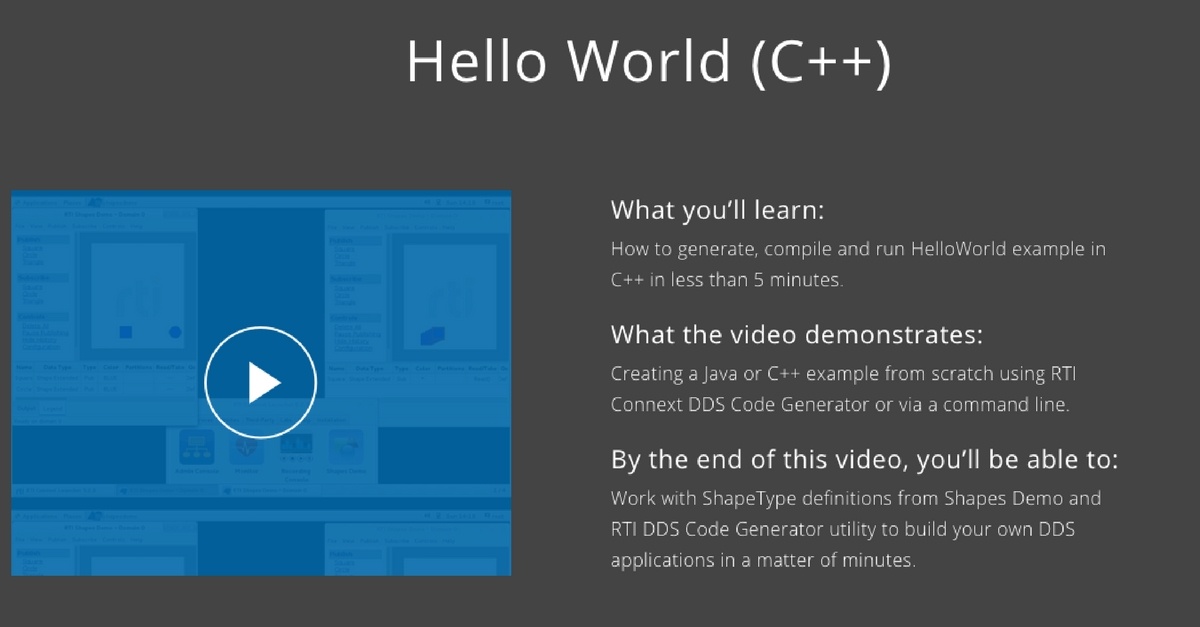 I started my career at a defense company in the San Francisco Bay Area on a project that involved a distributed system with several hundred nodes (sensors, controllers and servers). All these nodes were networked over different physical media including ethernet, fiber optics and serial. One of the challenges we faced was ensuring our control systems could operate within their allotted loop times. This meant data had to arrive on time regardless if a node required 10 messages per second or several thousand messages per second. We needed a more effective method of communication than point-to-point or centralized server.

To address our most extreme cases of receiving data every handful of microseconds, a colleague of mine developed a protocol that allowed any node on the network to publish blocks of data to a fiber optics network analogous to distributed shared memory. The corresponding nodes would only read messages that enabled them to compute their control algorithms and ignore all other data. This was around 2009, and little did I know at the time, this was my introduction to the concept of data-centric messaging. It so happens that the Object Management Group (OMG) had already been standardizing data-centric messaging as the Data Distribution Service (DDS), the latest version of which was approved in April 2015.

Fast forward a decade later, I have recently been hired as a product manager at Real-TIme Innovations (RTI), the leading DDS vendor. Like most avid technologists ramping up on a new product, I have been eager to get past the “setup” phase so I can start seeing RTI Connext® DDS in action. To help me get ramped up, my new colleagues shared these Getting Started video tutorials. With these videos, I was able to quickly build sample applications that communicated with each other over DDS. You can check out the Getting Started tutorials for yourself to see how to configure, compile and run HelloWorld examples in Java and C++.

Granted, there’s more work for me to do to get defense-grade computers talking over fiber, but here’s why I found these tutorials so helpful: they enabled me to quickly pass the beginner’s phase allowing me to hit the ground running right away, therefore shortening my learning curve. Check out the tutorials and see for yourself!