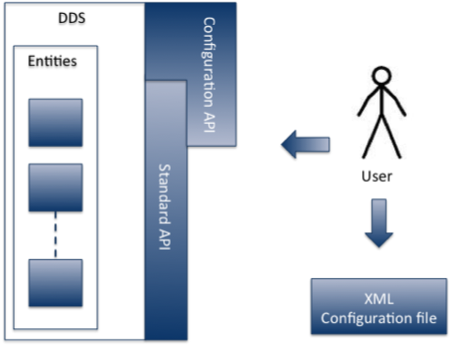 RTI Connext® opens a new horizon to make life easier for users. Proof of that is the new and experimental XML-Based application creation feature that allows defining the static part of a DDS system in a XML configuration file. By means of a new set of APIs, all the entities defined in the configuration file can be created automatically at run time so that they can directly be retrieved and used.

The first consequence as result of this functionality is that users don't need to create programmatically a DDS system anymore. Instead, the system is described in a more readable and understandable format that is interpreted by RTI Connext hence users only have to focus on how to use the entities in such system. For instance, from the previous example, the C++ code to retrieve the DataWriter is as follows:

This workflow significantly decreases the deployment time, mainly as the system size increases -it also decreases the number of "copy-and-paste" that programmers love to do with repetitive tasks. In addition, describing a system in a configuration file serves as a mechanism for system designing as well as sharing with other members of the team.

In this context, RTI Connext furthermore helps out to test DDS communications with the also new and experimental utility RTI Prototyper: It is able not to only create the entities but to automatically write and read data on them, providing a zero-coding solution for running DDS

The entry point of these features begins with RTI Connext. The default package contains the new set of APIs whereas RTI Prototyper and detailed documentation can be obtained from the downloads section of the RTI Community and Research Portal – everything is contained in the Prototyper package.