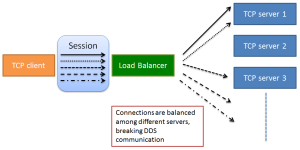 I’m excited to talk about new stuff we have added to our latest release, RTI Connext In particular, I’ll talk about scalability improvements we added to the RTI TCP Transport Plugin.

Something to consider when building a TCP server that handles hundreds or thousands of clients is socket management strategy, or socket monitoring strategy. This refers to how the system reacts to socket-generated I/O events.

While the strategy used by RTI Connext 5.0.0 TCP Transport Plugin (select() monitoring) had good scalability for servers running on Linux systems (up to 1,500 clients), we observed during experiments that scalability on Windows systems dropped to approximately 600 clients.

MS Windows IOCP provides an efficient threading model for processing multiple asynchronous I/O requests on a multiprocessor system. During our test on Windows systems running RTI TCP Transport Plugin, we observed an increase of the scalability from roughly 600 clients to 1500. However, RTI Connext 5.1.0 did not include Windows IOCP support for TLS over TCP.

You can start using this feature by adding the following XML snippet to the TCP Transport Plugin configuration:

Windows IOCP support is not the only new scalability improvement included in RTI Connext 5.2.0. Now I’ll talk about another addition that provides support for even more DomainParticipants acting as TCP clients.

When requiring high scalability using TCP, the TCP server becomes the bottleneck, and we need to take advantage of external load balancers. A load balancer is a software or hardware device that increases the capacity and/or reliability of a system by transparently distributing the workload among multiple servers. In particular, a TCP load balancer distributes connections from TCP clients among multiple TCP servers – in our scenario, DomainParticipants.

In order to support external load balancers, RTI Connext 5.2.0 includes a new session-id negotiation feature. When session-id negotiation is enabled (by using the negotiate_session_id property) the TCP Transport Plugin will perform an additional message exchange that allows load balancers to assign to the same DomainParticipant all the connections belonging to the same session:

In order to enable the session-id negotiation, you can use the following XML snippet:

This feature has been tested on a system using F5 Big-IP load balancer. However, it will work with other load balancers as long as:

I hope you find these new features useful and helpful in deploying highly scalable RTI Connext–based systems. To try it for yourself, download our free 30 day trial, today!