It was Halloween two days ago. Everywhere you looked, people were running around in superhero costumes. You know them: Superman, Wonder Woman, Batman. Why do people love heroes?  Because they’re inspiring. Heroes boldly venture into new challenges and accomplish things nobody thought they could.

Which brings me to RTI’s recent User’s Group meeting – the Connext Conference. Cartoon heroes can’t compare with the real-life adventurers there. Mercedes showed us how they built their advanced autonomous car. DocBox talked about their product taking medicine into a future of intelligent, connected devices. SHM’s Fiizk division showed how to sustainably farm the oceans to deliver high-quality salmon − including shooting sea lice with lasers! Airbus showed their progress in building Vahana, the world’s first electric, certified, autonomous personal transport…a flying car! And then, the Grand Coulee Dam engineers from the US Army Corps showed us how they control the largest power plant on the continent. All of these applications were built using RTI software.

But I have to admit, the surprise of the meeting for me was on a smaller scale. OpenROV showed videos from their amazing underwater robot named Trident. Trident can take you places you could only go by diving, and even some underwater destinations that you would never attempt to go. 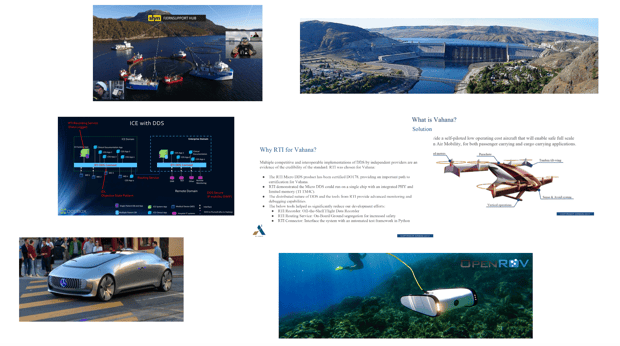 Take a minute and peruse the online presentation materials from the Connext Conference. You’ll find that these systems are pushing the state of the art. The ideas are amazing, and their leaders are visionary. But in my opinion, ideas are free and vision is cheap; execution is what’s golden. Our users go way beyond thinking. These engineers are real doers.

The spheres are not verticals; they span traditional industry segments. It is much easier to understand the IIoT by looking at the technological goals of applications rather than verticals like manufacturing or transportation.

The three spheres are:

The most important industrial applications are “predictive maintenance” systems that upload device data to a cloud service. The cloud systems then analyze the data to predict when a part may fail, allowing proactive repair. 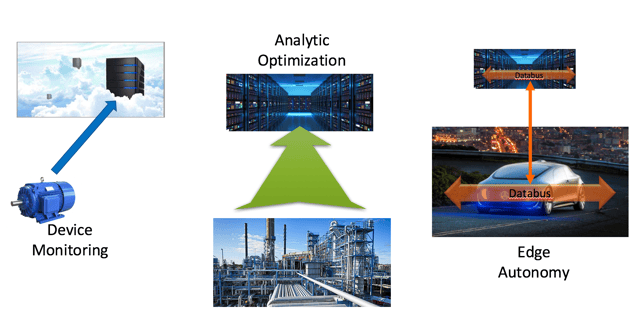 From a connectivity perspective, most optimization applications use the collect->gateway->IoT platform->analyze->optimize pattern. The "collect" step may involve many related devices, but typically, there’s little to no connection between devices. Data flow is mostly many to one-way from the devices to the analytics. The feedback to the plant may only be through a human operator. Optimization applications thus connect many related devices in a plant, usually to a single destination.

The real driver in this category is the magic of connecting functional artificial intelligence (AI) with pervasive networking. Connectivity is truly challenging, linking many devices in the field, fog and cloud. Autonomy applications can grow very large by combining systems into supersystems. In these applications, the cloud is only one component of the connectivity and computing infrastructure.

Immediate opex reduction is clearly compelling. However, long-term, monitoring and analytics represent only a small portion of the value of pervasive connectivity. The future trillion-dollar impact of the IIoT will mostly result from bold new designs. The stunning impact of new, autonomous infrastructure will eventually overshadow the value of optimizing current infrastructure.

All the above RTI user applications, and most all our 1000+ design wins, are in the Edge Autonomy sphere. They have several things in common: most require reliability beyond what’s easily countable in “9’s”. They interact with the real world at real-world speeds measured in milliseconds. Their biggest challenge is complex software integration. And they are Bold New Things.

Which brings me back to heroes. What you see in the movies is the flashy end result. But really, what makes them special is behind the scenes. What would Batman be without the Bat Cave? James Bond without his gadgets? They would have died in the first five minutes of every movie. And Wonder Woman’s Invisible Plane and Lasso of Truth are really what make her, well, a wonder.

That’s also true in the real world; what you see is the final product. Behind the real-world wonder is real science, real execution and increasingly, real software. Years ago, chips, materials and design drove innovation. Today, innovation relies mostly on data flow, module integration and AI. As Intel’s Doug Fisher summed up, “Hardware without software is just heat.”

I want to thank our users for digging deeply into what makes their flashy results really work. You showed us how to turn that heat into wonder. That, to me, is a great example of real heroism. 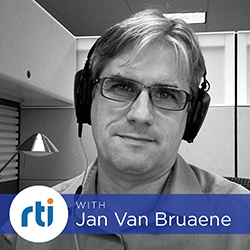