Back to RTI News Releases

Force Technology is a market leader in the design of multi-ship simulator systems. Its latest marine simulator represents a major step forward. This simulator is the world's first system to provide a complete environment for training tugboat captains in maneuvering large vessels such as oil and gas tankers into restricted spaces using multiple tugs. This demanding, full-mission trainer application simulates in real time the dynamic configuration of up to four vessels and the resulting variables on the tow lines when handling vessels in a seaway. 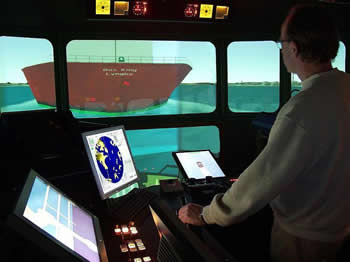 "One of the key enabling technologies now emerging in the design of such distributed simulator systems is real-time middleware," commented Peter Justesen, head of Simulation and Information Technologies at Force Technology. "Our decision to select RTI's solution was based primarily on the performance advantage demonstrated by our technical evaluation of available DDS products."

"The publish-subscribe paradigm of DDS enables systems to share data without having to create unique interfaces for each system. It therefore frees our developers from needing to know the internal operation of each subsystem in order to retrieve its data. All the application needs to do is to subscribe to the desired data sets and DDS does the rest," Justesen continued. "And using standards-based interfaces such as DDS provides our designers with a COTS-based development environment that greatly simplifies system maintenance and the introduction of upgraded hardware in our operational systems without requiring a rewrite of the application software."

"Simulators are an ideal application for the DDS standard," stated David Barnett, vice president of Product Management at RTI. "DDS was designed specifically to ease the development of heterogeneous distributed systems such as simulators. These systems have demanding real-time data distribution requirements and incorporate a mix of computing platforms. I am delighted that Force Technology concluded that RTI was best able to meet the stringent performance requirements of its leading-edge application."

This new interactive tug simulator facility has been developed in close cooperation with SvitzerWijsmuller, one of the world's leading tug operators. The cooperation agreement between the parties will secure the continued development of the facility and the courses. Force Technology was chosen as the preferred partner for this development due to its combination of experience in advanced ship hydrodynamics, mathematical modeling and simulation, all of which is available at the same geographical location in Copenhagen, Denmark.

The simulator offers the following features:

Force Technology is a leading design consultancy and service provider offering a wide range of services and solutions for the international market. They transform highly specialized engineering knowledge into practical and cost-effective solutions, and provide consultancy within several areas. Force Technology is a privately owned center of expertise approved by the Danish Ministry for Research and Development as a technological service institute. Their experience with simulation technology goes back many years, and includes lay-out and design simulation, determination of safe operational limits in wind, current and waves, maneuvering and stability simulations, etc. Facilities include full-mission simulators, including bridges and tug cubicles, towing tank, and wind tunnels. Force Technology sells their simulator products to customers around the world. The company's headquarters are located in Brøndby outside Copenhagen. They also operate subsidiaries in Sweden, Norway, the Netherlands, USA, Brazil and Russia. In 2004 the group's Danish and international operations employed a staff of more than 1000 employees. For more information, please visit www.force.dk/en.

Real-Time Innovations (RTI) is the Industrial Internet of Things (IIoT) connectivity company. The RTI Connext® databus is a software framework that shares information in real time, making applications work together as one, integrated system. It connects across field, fog and cloud. Its reliability, security, performance and scalability are proven in the most demanding industrial systems. Deployed systems include medical devices and imaging; wind, hydro and solar power; autonomous planes, trains and cars; traffic control; Oil and Gas; robotics, ships and defense.

RTI lives at the intersection of functional artificial intelligence and pervasive networkingSM.

RTI is the largest vendor of products based on the Object Management Group (OMG) Data Distribution Service™ (DDS) standard.

RTI is privately held and headquartered in Sunnyvale, Calif

Get RTI News by Email